In conversation recently, Edward Wilson, winner of the Pulitzer Prize, reminded us we are stewards, not owners of the biosphere.  Wilson is a primary authority in the disciplines of sociobiology and biodiversity whose career spans more than sixty years, and it is from this vantage point that he cautions “the attack on biodiversity, in an attack on ourselves”. Wilson was in the UK to promote his latest book, The Meaning of Human Existence, and launch the MEMO (Mass Extinction Monitoring Observatory) Project.  MEMO’s mission to inform, to educate, and inspire action to protect biodiversity. The monumental stone building spiralling out of the ancient Jurassic Coast will embody images of species lost to extinction in recent times.  Species extinction rates are more than a 1,000 times the background rate, and the International Union for Conservation of Nature (IUCN) estimates that more than 22,000 of the 73,600 assessed species, are threatened with extinction.  Assessed species represent only a fraction of the 1,889,587 described species. Without assessment we can not know the full extent of the damage, but we do know biodiversity ensures resilience.

The main threats to species are from human activities, primarily those driving habitat loss and degradation, introduction of alien species, over-exploitation of natural resources, pollution and climate change.  Awareness of the fragility of our ecosystems, is growing, but action is lagging.

Last week as part of Sustainability Week @theHospitalClub, a private members club in London, the Marine Foundation launched a short film celebrating   Apsara, Spirits of the Sea, a living sculpture in the sea, inspired by ancient, beautiful, dancing Hindu spirits.  9am was early for a private view, but the audience were drawn by tales of mermaids and sea nymphs.  Celia Gregory, founder of the Marine Foundation and artist, knows we are visual creatures.  Images trigger an emotional response and can shift a mindset in a way that statistical lists can provoke scepticism.

The sea nymphs’ freedom and beauty belies their threatened habitat.  Coral reefs are among nature’s most diverse, breathtaking and critically endangered eco-systems, with 33% of reef building coral threatened.  Often damage to the oceans is unseen, hidden from view below the surface, or lost in its great scale.  Reef balls, eco-stars and coral nurseries are some of the techniques that have been used to rehabilitate reefs damaged by storms or human interventions.

Echoing another quote attributed Wilson, “You teach me, I forget. You show me, I remember. You involve me, I understand”, the Marine Foundation works at sites with where the coral reefs has been damaged, but there is eco-tourism potential, and crucially, the local community is involved. Ongoing management and marine spatial planning (removing predators, transplanting corals, controlling anchoring, establishing fishing restrictions, and opportunities for guardianship) are vital for restoration to be effective  Fishing restrictions around the reef create safe breeding grounds for fish and improve the catch nearby.  Sharing knowledge and information from the nearby Karang Lestari Biorock Coral Reef and Fisheries Restoration Project in Pemuteran, winner of the UN Equator Award for Community-Based Development and the Special UN Development Programme Award for Oceans and Coastal Zone Management in 2012, engaged the fishing community, who arranged for a blessing ceremony for Apsara (pictured above) and helped sink the sculpture.

Opening the same day, Here Today, curated by Artwise, celebrates the 50th Anniversary of The IUCN Red List of Threatened and Endangered Species, and supported by Baku Magazine.  Works of world famous artists such as Tracey Emin, Andy Warhol, Gavin Turk, Peter Blake, United Visual Artists, Douglas Gordon, and Julian Opie are interspersed with those of newer talents, all implicitly asking whether our endangered species will be gone tomorrow.

The first chapter entitled Human Footprint brings us face to face with some of our impacts.  Ocean plastic pollution is a relatively new problem, but vast: the UNEP Year Book 2014, states, “plastic waste causes financial damage of US$13billion to marine ecosystems each year”; the largest of four giant gyres (whirlpools of water trapping rubbish) is estimated to be the size of Texas, and contain 3.2million tonnes of plastic; 44% of all documented seabird species are found with plastic in their stomachs.  The Midway film shows the painful death throes of young marine birds fed plastics.  Alice Dunseath’s Plastic Shores Animations, (see 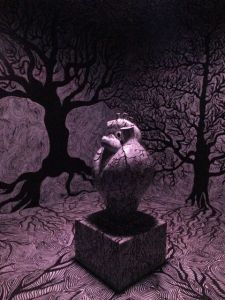 n at the SustainRCA Show) reminds us that these same micro plastics are entering our food chain.  Leyla Aliyeva’s experience Life, places a beating heart in the centre of a monochrome room of trees.  It is immersive and invites contemplation.  Chris Jordan and Rebecca Clark’s Silent Spring depicts 183,000 birds, the estimated number of birds that die in the United States every day from exposure to agricultural pesticides.  As with the 888,246 ceramic poppies planted for the Blood Swept Lands and Seas of Red installation the representation of an inconceivably large number is powerful.

Stephanie Quayle‘s Congress, gathers clay sculptures of one of our closest, and most intelligent relatives, orang-utans in casual human poses, but bound for a gallery in shipping crates: for us to marvel, or because their habitat has been destroyed? The chapter Unsustainable Sea and Changing Landscapes explores the pressure that humanity is putting on nature with poignant works inspired by the disappearance and death of the Caspian and Aral Seas.

Sayyora Muin’s Listen to the Silence of the Lost Sea, is a circle of women silently biding farewell to the Aral Sea, and their way of life  The world’s fourth largest saline lake until the 1960s when two rivers that fed it were diverted for agricultural use, and the sea has slowly desiccated since. 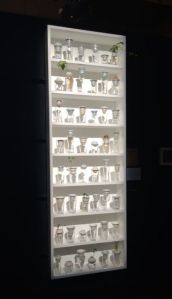 The final chapter, Here for the Future, shares the six key policy solutions outlined in the WWF Climate Solutions Report,  next to Alicja Patanowksa‘s Plantation, an installation made of ceramics and discarded glasses,a n urban garden accessible to us all.  Plantation is one of the innovative, engaging responses from recent graduates of the Royal College of Art curated by Julian Melchiorri.

Melchiorri’s Silk Leaf made of a biological material made of silk protein and chloroplasts. Silk Leaf absorbs CO2 and produces oxygen and organic compounds through photosynthesis. Melchiorri envisages building clad in photosynthetic facade breathing life into our cities.  Other works revive materials turning ‘waste’ into luxurious textiles (Neha Lad), or human poo to clean fuel (Shruti Grover).  The works are too numerous to mention, but Here Today, is at The Old Sorting Office, 21-31 New Oxford Street, WC1, until 17th December, so go be inspired!
“The next millennium, if we are to avoid catastrophe, must be the green millennium…And the best,  most dramatic  and most reliable motivator of human behavioural change is beauty”, Elizabeth Farrelly.
Image credits: IUCN; The Marine Foundation