We instinctively have a sense of the value of nature, whether the sound of the ocean or the warmth of winter sun.  Signs of the strains on our relationship with nature confront us almost daily: an article in the Financial Times described the Ganges, India’s holy river, as deadly, after “pollution has turned the sacred waters into a lethal cocktail of industrial and human waste.” Species extinction rates are more than a 1,000 times the background rate, driven primarily by our over-exploitation of natural resources, pollution and climate change.  Today, China’s premier Li Keqiang announced new targets to use of coal and chronic air pollution levels.  In recent days investors, commentators and journalists have speculated on the impact of ‘Under the Dome‘, a Chinese-made documentary charting the impact of air pollution on citizens, viewed over 160 million times since its release last weekend.  With praise from government ministers and state media, the documentary is causing a surge in public awareness of the impact of pursuit of economic growth above all else.

At the Intelligence Squared debate, “Money can grow on trees“ chaired by Matthew Taylor, the auditorium was packed to the rafters for the discussion of whether nature and business have a competitive or collaborative relationship.  In his opening remarks, Peter Karieva, Chief scientist for The Nature Conservancy, made a compelling business case for nature: “in the long run business doesn’t stand a chance without nature”. The “long run” is important, as Karieva notes, the greatest tension between nature and business is their incompatible time horizons.

The primacy of quarterly profit reporting, and management incentives aligned to short-term key performance indicators, means that benefits which are not swiftly evidenced, such as avoiding environmental damage, are overlooked.  Policy makers grapple with similar tensions. Green Alliance’s report, “Green liberalism: Reforming the Treasury for long term policy” described the tension between HM Treasury’s dual responsibilities for the nation’s finances and economic growth.  It is standard practice to assume costs or benefits experienced now are worth more than those expected in the future, and to discount accordingly.  The higher level of “discount rate”,  the greater the future benefits have to be.  This matters for environmental policies which often come with short term costs, and pay-offs long in the future.  HM Treasury uses a higher discount rate for future impacts than some of its European peers, so it is comparatively more difficult to make the case of environmental investments in the UK. The Green Alliance report asks, “Do we want to keep £100 in our pockets today at the expense of, for instance, more than £1,000 cost in damage to the natural environment that our grandchildren would inherit?”  A challenge for campaigners is that climate change, while vital, is for many intangible, with impacts occurring in the seemingly distant future, or distant geographies.

These horizons no longer seem so far away.  Weather events closer to home, such as flooding in the UK, are changing public perceptions of climate risk.  After decades of campaigning, Tony Juniper, called on the environmental movement to show the financial risk of not acting.  This approach has gone mainstream with the fossil fuel divestment movement and discussion of stranded assets (i.e. assets that have suffered from unanticipated or premature write-downs, devaluations, or conversion to liabilities as a result of risks such as changing social norms, regulation, emergence of clean technology).  Other ecosystems, such as water and soil, are providing feedback within five years, time frames that sit comfortably in a business planning framework.  Since 2011 companies have spent more than $84bn worldwide to improve the way they conserve, manage or obtain water, according to sources reported in the FT in July 2014.

The myopia is not just temporal, as Juniper noted, “we see environmental problems as environmental, when they are economic failures”.  Business has long enjoyed the benefits of ecosystem services for free, or at least far below their true cost.  Juniper’s new book, “What Nature Does For Britain” describes the clean water and secure food we take for granted on the back of nature’s capital, estimated by the O.N.S.to be worth £1.5 trillion in the UK.  Quantifying nature’s contribution to the bottom line in cash terms, is not easy, but B & Q, Marks & Spencer, and Unilever are among the small-group of pioneers beginning to recognise, measure and account for the value of nature to their businesses.

Jeremy Oppenhiem, leader of McKinsey’s global practice on Sustainability and Resource Productivity, was adamant about the importance of pricing nature, and incorporating its spiritual and aesthetic benefits into valuation. 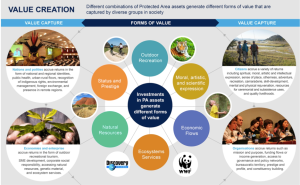 A great deal of work is being undertaken in this area, by the Nature Conservancy, Trucost and others.  For example, the Smith School of the Enterprise and the Environment published a short discussion paper on the development of a new asset framework for protected areas.  The image drawn from the paper illustrates the different forms of value that PAs generate.  The intention is to demonstrate the value generated by PAs in ways that are meaningful for different stakeholders in a rapidly changing world, where funding is constrained.  Understanding the value of protected areas enables enhanced risk management, and can attract new investment.

A more accurate reflection of the value of the ecosystem services that nature provides bring externalities back into the cost of doing business, slowly eroding the false dichotomy between business doing good and doing good business.  Perhaps even ultimately blurring the lines between mainstream investing and social impact investing.  As Oppenheim commented only by moving at scale will we be able to do what is required, and the US$90 trillion worth of new infrastructure investment expected over the next 15 years presents an opportunity take a responsible view of impacts.

As Programme Director of the New Climate Economy, Oppenheim drew on the conclusions of their recent report to emphasis the “opportunities for self-interested national action” at the national, and sub-national level.  “Better Growth, Better Climate”, The report provides a ten-point global action plan for governments and business to support better growth in a low-carbon economy through strong political leadership, and credible, consistent policies.

Does the climate change compact signed by the three major party leaders represent the beginning of a shared, non-partisan approach to a low-carbon economy?  Few observers expect the general election in May to deliver an outright majority, so in the absence of strong political leadership, where are nature’s stewards?  Does the civil service have a role to play as custodians of nature, particularly for future generations?

Tony Juniper urged us all to echo The Wildlife Trusts and the RSPB’s calls for a Nature and Wellbeing Act for England to support significant improvements in the health and wellbeing of people, society and the economy.  Well-being may sound ambiguous, but the O.N.S. began measuring national well-being in 2012 to try and capture some of the complex impacts of policy, and address the limitations of economic models.  For example, the Green Alliance reports that while the fourth carbon budget includes the financial costs of environmental policies, it misses the benefits such as improvements to health from better air quality, lower congestion, accelerated innovation or reduced risk to future UK growth from climate change.

Lucy Siegle, journalist at The Guardian, and Nick Dearden, Director of the World Development Movement, were both sceptical of businesses’ ability to manage their rapacious appetites for nature’s resources without significant pressure.  However social media and technology are making it easier for consumers and campaigners to be the conscience of policy makers and business.  Brands are susceptible to pressure from civil society.  We must demand more of all those who act on our behalf to reshape the norms of business and politics.

In the meantime, experience nature, it will give you the energy to do something about it, urged Karieva.  Ultimately, we protect what we love, and then act in enlightened self-interest!