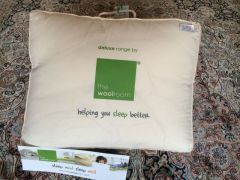 I have had my eye on some woollen bedding for a while, but recently out found that feathers and household dust may aggravate my daughter’s eczema.  Along with the 20% discount on all wool bedding that the Wool Room are running until 1st December, I had all the justification I needed.

The deluxe all seasons single duvet (reduced to £124) arrived with free delivery the next day!  The duvet is a summer 200gsm (3-5 tog approx) duvet and spring/autumn 300gsm (6-9 tog approx) duvet that can be snapped together with poppers to make a winter duvet.  The duvets are made from 100% platinum grade British wool, covered in 100% cotton and held in place with a quilted stitch pattern.  The duvet is machine washable on a wool cycle with wool detergent, spin and line dry, and benefits from a good airing.

Why wool?  Wool is a great insulator, helping to regulate temperature in hot and cool weather.    Wool ‘breathes’ and wicks away moisture (perspiration) when you are sleeping.   When moisture is trapped in a duvet, humidity increases which can make for a restless and disturbed sleep.  House dust mites also love warm, damp, dark conditions, and duvets made of synthetic fibres such as polyester or nylon or down are less able to regulate moisture.  As dust mites aggravate asthma and some other allergies, reducing dust mites may alleviate symptoms for asthma sufferers, and other allergies.  Wool is also anti-bacterial, and naturally flame retardant, as well as renewable, recyclable and biodegradable.

My daughter used to get hot at night and throw her old duvet off.  With wool we have noticed that happens less, and you don’t get all the stuffing getting stuck down one end! 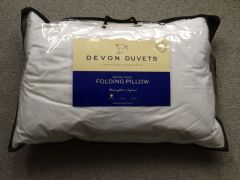 Already convinced of the benefits of wool, we invested in some wool pillows.  I was keen to try out the folding pillow from Devon Duvets as our feather pillows seem to loose their plumpness after about a year.  Wool needs to be regularly aired to maintain its qualities of wicking away moisture, and the design of the folding pillow makes it easier to hang the pillow and air it effectively.  Simple.

We ordered the 3 fold wool pillow (£69) made of 100% Platinum Grade British wool in a 100% cotton casing and handcrafted in the Devon Duvets workshops.   The wool  is not bleached or chemically-treated (chlorine gas is often used to make tumble drying of wool possible).  The pillows can be machine washed, but must be thoroughly spin and line-dried.  The pillows are soft, springy and supportive.  Perfect for my own private slumber party every night of the year!