Cosy up on your sofa and have a go knitting your own Christmas decorations, either for on the tree or cluster them on a shelf or mantelpiece for a seasonal scene.  There is a whole family of winter animal patterns are available for free from Rowan with their suggestion of Fine Tweed and British Sheep Breeds yarns.  Penguin or polar bear, owl or rabbit, all are cute, and even come with their own accessories.

Or if knitting is not your bag, pictured is an advent calendar designed by Jemma Weston (pattern available for free from Rowan) to crochet and felt.  It makes good use of all those odd bits of yarn you might have left.  The calendar is a crochet and felting pattern.  It can be saved and savoured for many years, and filled with little treats. 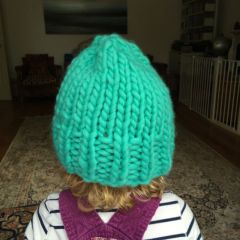 And voila!  The result of my first experiment in knitting at the Knit Nation class with Wool in the Gang at John Lewis earlier this week.  The whole project took between two and three hours for this complete beginner.  The Zion Lion knit kit (£30) had very clear, concise and easy to follow instructions.  I have been bitten by the knit bug!  My daughters were both fascinated by the process, and very excited to receive their one size seems to fit all beanie hat. 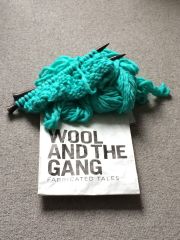 A kick start to Wool Week, with a free knitting class from Wool and the Gang in the John Lewis store in central London as part of Knit Nation.  I hadn’t picked up a set of knitting needles for twenty years, not since I had knit-perled along side my grandma.  However, Alexandra from WATG was undaunted by my absolute beginner status.   I was swiftly given an enormous set of wooden knitting needles and chosen a peppermint green ball of chunky wool.  Slip knot in place, cast on came out of the recesses of my mind, knit I could remember, and purl I was gently reminded of, and before I knew it I had my first row of ribbed stitches under my belt.  The giant needles gave me a sense of being Lilliputian, as did the sense of wonder at the evident skill on the sofas around me.  It was beyond my skill level to talk and knit simultaneously, but there were other novices to join me in my meditative state, and the industry was infectious, creating an immediate sense of community.

With the chunky wool and giant needles progress was rapid, and

after only an hour the hat was already starting to materialise.  Others in the groups attend or run regular knitting groups, and it is easy to see how quickly you can get to a level where you could maintain a good chat and knit in the company of friends.  It might be a while before I have knitted a pouf or cushion but I’m on my way.

The UK Handknitting Association has all sorts of information from free patterns to tips on learning to knit or knitting groups in your area.

of wool as a natural, renewable and biodegradable fibre.  Knit Nation is a series of free knitting classes and drop ins hosted by some of the UK’s most exciting knitting brands.  There are even men only classes from Wool And The Gang, so cast those stereotypes aside and try something new.

And nominate your favourite interior wool product for the OneWool promotion.  It could be a rug, carpet, fabric, furnishing or even art, such as the gorgeous textured acoustic wall panels made out of felt by Anne Kyyro Quinn. My nomination is likely to be similarly surprising, fun and functional: the Solidwool chair, I saw last week at Best of Britannia.  To submit your nomination, e-mail a picture of your chosen wool product and your reason for choosing it (50-100 words) to onewool@campaignforwool.org.

Check out the Campaign for Wool’s site for a full list of events. 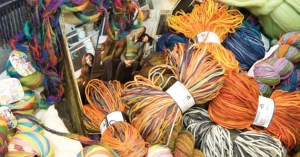 This weekend it is the Knitting and Stitching Show at Alexandra Palace in London, 10th -13th October.  If you need a little inspiration to make, do and mend, explore a new hobby, or advance an old one there is plenty on offer.  There are exhibits from some of the leading names in textiles, as well as taster workshops for the amateur and plenty of supplies available for to get you going.

Carefully curated would be heading for the Upcycling Academy,  headed by Barley Massey of Fabrications. and joined by TRAID, War on Want and Craftivist Collective.  There will be all manner of creative avenues for old cast-offs from rosette making to knitting with waste fabric, plus lots of customisation and ideas!

A hearty appetiser before Wool Week starts on Monday.